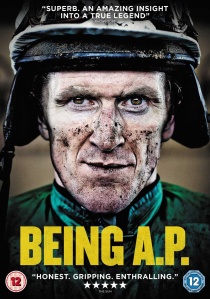 News
News Article Go back to homepage
Being A.P., released on DVD and Blu-ray on 30th November 2015 courtesy of Entertainment One, is the incredible inside story of a sporting legend.
Tony McCoy
Anthony Wonke
Alan Maher, Nick Ryle, John Woollcombe
Entertainment One
1 hour 39 minutes
30/11/2015
#BeingAP
Thank you for supporting DVD365.net when you order using the link(s) below. As an Amazon Associate we earn from qualifying purchases
Buy DVD
Buy BD
Information

Being A.P., released on DVD and Blu-ray on 30th November 2015 courtesy of Entertainment One, is the incredible inside story of a sporting legend.

As A.P. McCoy nears the end of his career, the characteristics that have driven him to dominate the most dangerous of sports remain as strong as ever. Fearless and willing to sacrifice everything to achieve his goals, this film reveals the exhaustive training routine, injuries, doubt, triumphs, failures, and A.P.'s soul-searching to find a way to leave the stage.

With unprecedented access to A.P. and those closest to him, Being A.P. celebrates an incredible man who became the greatest jump jockey the world has ever seen.