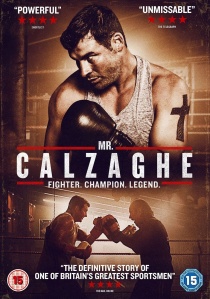 Mr. Calzaghe, released on DVD and Blu-ray on 23rd November 2015 courtesy of Entertainment One, is the incredible real-life Rocky story of a true British boxing legend.

Joe Calzaghe and his father Enzo come from humble beginnings in Newbridge, Wales. Through sheer grit and determination this father-son team have travelled the globe from Cardiff to Las Vegas to take on the vicious world of boxing, beating the best fighters that America could throw a them and showing they are a force to be reckoned with.

A definitive story told in their own words and featuring contributions from Chris Eubank, Mikkel Kessler and Michael J. Fox, Mr. Calzaghe is not only the thrilling and pulse-pounding account of an amazing career but a moving celebration of the unique bond between a father and son that created a sporting hero.