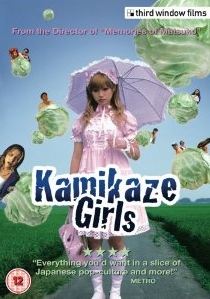 Japanese director Tetsuya Nakashima (Memories Of Matsuko) has rapidly earned himself a reputation as a hugely talented and idiosyncratic auteur whose genre-busting films have been favourably compared to the work of directors such as Tim Burton (Charlie And The Chocolate Factory; Big Fish), Baz Luhrmann (Moulin Rouge; Romeo And Juliet) and Jean-Pierre Jeunet (A Very Long Engagement; Amelie). Now, the pop culture phenomenon that has taken Japan by storm, Nakashima's Kamikaze Girls, comes to DVD courtesy of Third Window Films on 12th January 2009.

Based on the best-selling novel-turned-manga by cult author Novala Takemoto, Kamikaze Girls concerns 17-year-old Momoko (Kyoko Fukada), a self-absorbed dreamer and 'Lolita' fashion obsessive whose love of all things Rococo sees her fanaticising about fleeing her backcountry home and living life in 18th Century Versailles.

Together, they embark on a vividly coloured, sugar sweet, hyper-stylised odyssey of female bonding all set to a pounding J-Pop beat. Described as 'a wild, surreal speed-freak's walk on the kitsch side of pop culture obsessions' by The Sunday Times and by Metro as 'everything you'd want in a slice of Japanese pop culture and more,' Nakashima's adaptation of Takemoto's novel is a full-on bubblegum-laced extravaganza -- the cinematic equivalent of a sweet-toothed teenager being given the keys to the candy store.

Starring J-Pop idol Kyoko Fukada (The Ring 2; Dolls) and pop star turned actress Anna Tsuchiya (Dororo; Sakuran), Kamikaze Girls is delightfully exuberant trip through teenage alienation terrain in the company of two of the most fun and endearing girls ever to grace the screen.

HotUHD
StudioCanal is thrilled to announce that the iconic cult classic, Highlander, is being released to own on 4K UHD for the very first time 31st October 2022 with brand-new artwork from celebrated artist Matt Ferguson. END_OF_DOCUMENT_TOKEN_TO_BE_REPLACED
Top PicksView