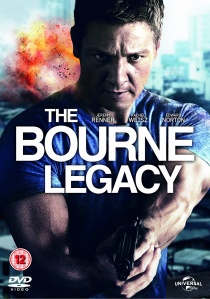 Immerse yourself completely in the latest installment of the adrenaline-fueled Bourne franchise with The Bourne Legacy which is released on Blu-ray with UltraViolet, DVD and Digital Download on 3rd December 2012 by Universal Pictures UK.

Tony Gilroy, writer of the previous Bourne films, takes the helm as director in this next explosive chapter of the high-octane espionage thriller series. Watch as he expands the Bourne universe, created by Robert Ludlum, with an original jaw dropping story that introduces us to a new hero, Number Five, Aaron Cross (Jeremy Renner - Avengers Assemble, Hurt Locker), whose life-or-death stakes have been triggered by the events of the first three films.

In The Bourne Legacy Cross (Renner) is a member of Operation Outcome, a Department of Defense's black-ops programme which enhances the physical and psychological abilities of its agents with a combination of red and green 'pills', administered by scientist, Dr. Marta Shearing (Rachel Weisz - Deep Blue Sea, Lovely Bones). With the FBI now investigating the CIA and its clandestine programme, Eric Byer (Ed Norton - Moonrise Kingdom, The Incredible Hulk), a retired air force corporal, is enlisted by the spy agency to eliminate all traces that it ever existed, including all its agents and scientists. However, what stands between them and success is one man: Number Five.

What ensues is fast paced adrenaline fuelled action which sees Cross and Shearing go on the run in order to survive. The question is, can they outsmart and outrun the same black-ops team who brainwashed their previous guinea pig, Jason Bourne?