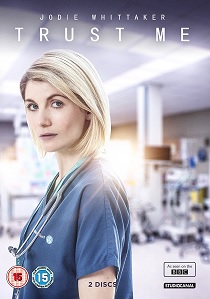 Driven to desperate measures, nurse Cath Hardacre (Jodie Whittaker, Doctor Who, Broadchurch) steals the identity of her best friend, an A&E doctor and finds work in a struggling emergency department.

It's not long before she starts to enjoy the trappings that come with her new job and Cath soon finds herself falling for fellow doctor. With her dream job and the perfect man, she buries herself in her imposter persona, until her old life threatens to shatter her new existence and she's forced to go to increasingly desperate methods to cover up her lies.

Will her lack of skills have deadly consequences? How can she be in a relationship when she can't be herself? How can she keep hold of the perfect life when she is living a lie?

From screenwriter Dan Sefton (The Good Karma Hospital), the four-part mini-series Trust Me is released on DVD 18th September 2017 from StudioCanal.

DVD
In The Little Things, released on DVD and Blu-ray 10th May 2021 from Warner Home Video, Kern County Deputy Sheriff Joe "Deke" Deacon is sent to Los Angeles for what should have been a quick evidence ... END_OF_DOCUMENT_TOKEN_TO_BE_REPLACED
Hot PicksView