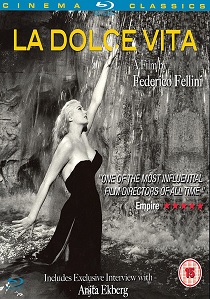 Federico Fellini's most famous and accessible film and his one true masterpiece, La Dolce Vita, released on Blu-ray by Nouveaux Pictures on 6th October 2014, is also one of the most influential movies of all time, universally acclaimed by critics, filmmakers and the public alike.

Marcello Mastroianni stars as gossip columnist Marcello Rubini, whose fascination with the decadence and hedonism of Rome's high society hinder his aspirations of becoming a more serious writer. The film chronicles his adventures in a world where life consists of a constant stream of sex, drink, glamorous parties and fine food. Both drawn to and repulsed by this lifestyle, Rubini finds himself torn between his passion for a beautiful American starlet and the Bohemian posturing of his friend, Steiner.

An iconic movie in every way andthe winner of the prestigious Palme d'Or at the 1960 Cannes Film Festival and an Oscar for Best Costume Design (the film also picked up Oscar nominations for Best Director, Best Screenplay and Best Art Direction), La Dolce Vita is one of the greatest works of cinema of all time.

Filled with some of cinema's most gloriously immortal images - including the unforgettable scene featuring Anita Ekberg in the Trevi Fountain and the stunning opening shot a helicopter lifting Christ's statue into Rome - this is also the film that gave us the term "paparazzi" and indeed: "La Dolce Vita". Featuring a unique and rare interview with Anita Ekberg, this is a must-own for all film fans.