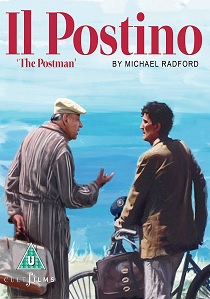 NewsComedyDramaWorld Cinema
News Article Go back to homepage
Michael Radford's masterpiece, Il Postino (aka The Postman) has been lauded as 'one of the most romantic movies ever made' and garnered critical acclaim and multiple accolades on its release in 1994. Now this epoch-making film is set for release as a stunningly restored Dual Edition on 15th October 2018 thanks to CultFilms.
Massimo Troisi, Phillipe Noiret, Maria Grazia Cuccinota, Renato Scarpa, Orazio Stracuzzi, Anna Bonaiuto
Michael Radford
Mario Cecchi Gori, Vittorio Cecchi Gori, Gaetano Daniele
Cult Films
1 hour 48 minutes
15/10/2018
#IlPostino
Thank you for supporting DVD365.net when you order using the link(s) below. As an Amazon Associate we earn from qualifying purchases
Buy DVD
Buy BD
Information

Michael Radford's masterpiece, Il Postino (aka The Postman) has been lauded as 'one of the most romantic movies ever made' and garnered critical acclaim and multiple accolades on its release in 1994, delighting audiences with its engaging blend of humour and sunny romance, set against a stunning Italian backdrop.

Now this epoch-making film is set for delivery as a stunningly restored Dual Edition, including a Blu-ray and DVD version on 15th October 2018 thanks to CultFilms.

Telling the fictional story of the real-life Nobel laureate poet Pablo Neruda, the film won an Oscar® and was nominated in all main categories, as well as several BAFTA wins, and a multitude of international awards. It became one of the highest-earning foreign films, and the second highest grossing foreign film of its decade in the USA, earning $22 million on its US theatrical release alone - more than double that of Cinema Paradiso.

Scripted by Furio Scarpelli together with Anna Pavignano, Massimo Troisi and Michael Radford the story follows Pablo Neruda's exile to a tiny island off Italy where, being a high profile figure, he receives such huge quantities of mail that the local post office must hire an extra postman: Il Postino.

Though shy and poorly educated, our postman (Troisi - Nothing Left to Do But Cry, I'm Starting From Three), is so intrigued by Neruda (Philippe Noiret - Cinema Paradiso, La Grande Bouffe, Coup de Torchon, Life and Nothing But), he devises ploys to engage the attention of the great man. Neruda is charmed by the fresh simplicity of the postman's enthusiasm and the unlikely duo become friends; to the extent that the Poet of Love - as Neruda was known - ends up helping his young friend to follow his dreams and express his love to win the heart of the island beauty Beatrice (Maria Grazia Cucinotta - The World is Not Enough, The Rite).

Noiret does a grumpy but compassionate Neruda to perfection, while Troisi exudes a child-like simplicity of heart, mind and soul whilst never being over sentimental.