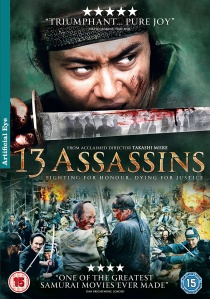 Following a hugely successful UK theatrical release that saw it garnering a Five Star review in Time Out and Four Star reviews in Loaded, The Sun, the Daily Express, the Daily Mirror, the Daily Telegraph and Nuts magazine, 13 Assassins comes to DVD and Blu-ray from Artificial Eye on 5th September 2011 riding a wave of critical acclaim hailing it as "one of the greatest samurai movies ever made... stunning" (Loaded), "one of the most memorable - and shocking - action films in an absolute age... brutal, bloody, brilliant" (Daily Mirror) and "an immediate action classic... magnificent" (Mail On Sunday).

13 Assassins sees director Takashi Miike, the man behind such uncompromising and unforgettable movies as "Audition" and "Ichi The Killer", indelibly stamping his trademark style on the Samurai genre with an ultra-violent, all-action, blood-spattered epic.

One of the most prolific, wildly unpredictable and controversial directors in cinema, here Miike reinvents himself once more "in top, slash-tastic form" (Variety), throwing in several obvious nods to the works of Akira Kurosawa and enough grotesquery to satisfy his loyal legions of fans to produce a "breathtaking ballet of blades and bloodshed" (Bizarre) that culminates in "a virtuoso 45-minute bloodbath you won't easily forget... a sustained frenzy of blistering choreographic skill that Hollywood won't top all year" (Daily Telegraph).

In mid-19th Century Japan the era of the samurai is beginning to fade as the feudal nation begins to enjoy a rare period of peace. But the fragile calm is soon threatened by the bloody rise of Lord Naritsugu, the Shogun's sadistic, psychopathic younger brother, whose position places him above the law and free to rape, mutilate and murder on a whim. Concerned that Naritsugu's actions will eventually destroy the Shogunate, top Shogun official Sir Doi covertly calls on esteemed and noble samurai warrior Shinzaemon Shimada to assassinate the evil Lord before it is too late. Shinzaemon willingly agrees and immediately gathers together an elite group of samurai to assist him in the task, knowing that what they are about to embark upon may well prove to be a suicide mission.

Following weeks of training and preparation, Shinzaemon and his men head off on a perilous journey through the mountains, hoping to ambush Lord Naritsugu and his entourage. However, on finally coming face to face with their target, the 13 samurai discover Naritsugu's men hugely outnumber them. Disregarding the odds, the fearless assassins continue with their plan and initiate a bloody showdown that they cannot allow to end until Naritsugu lies dying.

HotUHD
Now more stunning than ever before, return to the stunning locations and epic adventures in Peter Jackson's Middle-earth in The Lord of the Rings Trilogy, arriving on stunning 4K UHD 30th November 2020 from Warner Home Video. END_OF_DOCUMENT_TOKEN_TO_BE_REPLACED
Top PicksView