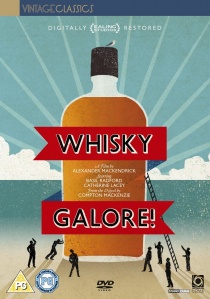 The name of the real ship, which sunk February 5th 1941 - during WWII - was the S/S Politician. Having left Liverpool two days earlier for Jamaica with a cargo of thousands of cases of malt whisky, it sank outside Eriskay, The Outer Hebrides, Scotland, in bad weather.

Due to wartime rationing, the thirsty islanders had nearly run out of the "water of life" so they saw this as an unexpected godsend. The locals managed to gather as many bottles as they could before both the ship sank and the men from Customs and Excise arrived to reclaim - the duty free - bounty. Even today, bottles are found in the sand or in the sea every other year.

Whisky Galore! appears in its original aspect ratio of 1:37:1 with mono 2.0 sound. Whisky Galore! was restored in high definition for this release using the best original film materials available. Unfortunately, some technical issues remain in the form of occasional printed-in dirt and scratches, periodic softness and instability of picture caused by film shrinkage, and image flicker caused by density fluctuation. These issues are all as per the original film source materials and reflect both the nature of the original film production and the physical state of the materials.

HotDVDBD3D-BDUHD
The producers of Godzilla reimagine the origins of one the most powerful monster myths of all in Kong: Skull Island, released on DVD, Blu-ray, 3D Blu-ray and UHD on 24th July 2017 from Warner Home Video. END_OF_DOCUMENT_TOKEN_TO_BE_REPLACED
Top PicksView