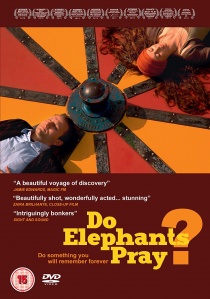 Stuck in a soulless career in advertising, Callum Cutter (Jonnie Hurn) searches for a meaning to his mundane existence in Do Elephants Pray?, coming to DVD on 20th May 2013, courtesy of Bluebell Films.

Directed by Paul Hills (Boston Kickout) Do Elephants Pray? is an ethereal drama that baits the spirit and demands answers to questions that may or may not exist.

Heading up his own failing firm, the hard-working, demanding boss burdens his staff with his increasingly erratic behaviour as he faces the challenge of selling an unsellable product.

He finds solace in his Tai Chi classes where he meets the stunning Malika (Julie Dray - Doctors), a free-spirited French woman unbound by the conventions or responsibilities of the world, who enchantingly appears without warning and immediately starts to question everything he believes in and relies upon. Through her unique blend of psychology and seduction she persuades him to abandon his make-or-break advertising campaign for a few soul-searching days roughing it in a forest in her native France.

While his employees led by the boisterous Marrlen (Marc Warren - Hustle) and the slovenly Jode (John Last) plan to abandon the sinking ship, Callum embarks on a life changing trip to where he must face a series of increasingly demoralising trials that tease his mind and taunt his perception of the world. Will he find the hidden meaning to his unfulfilled life and the solution to his problem?