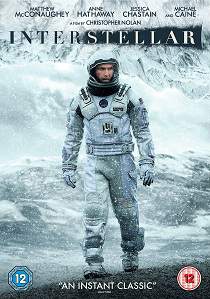 Nominated for five Academy Awards and winner for Best Visual Effects, hailed as the most exhilarating film this century, director Christopher Nolan's Interstellar makes its highly anticipated debut on Blu-ray and DVD on 30th March 2015, courtesy of Warner Home Video.

On a resource-depleted Earth in the near future, the discovery of a wormhole which can transport users through time and space unites scientists and explorers in the most important mission in human history. Among the potential travellers is a widowed engineer (Matthew McConaughey) who must decide whether to remain with his two children or to test the limits of human space travel, to see if there is a future for humanity out among the stars or whether the end of the Earth spells the end for humanity.

BD
Bursting with indelible characters, quotable dialogue and jaw-dropping special effects, Tremors is back and bigger than ever in this 4K-restored and fully loaded collectors' edition, available on 4K ... END_OF_DOCUMENT_TOKEN_TO_BE_REPLACED
Hot PicksView