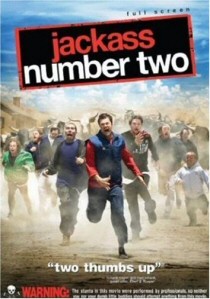 The entire cast have reunited after four years, raising the bar of hilarity by lowering the bar of taste as Jackass Number Two The Movie - Uncut explodes onto DVD from Paramount Home Entertainment on 26th March 2007.

This film is the craziest Jackass DVD to date and a must-have for all fans of the show. Director Jeff Tremaine has created the ultimate night in for all arm chair thrill seekers and dare devils.