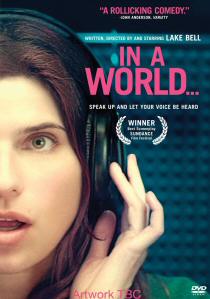 The film follows Carol (Bell), a struggling vocal coach who, shortly after getting her first big break in the cutthroat world of movie-trailer voiceovers, finds herself in direct competition with her father (Fred Melamed), the industry's reigning king, as well as his arrogant protégé (Ken Marino).

The In A World... DVD features commentary with writer/director/actor Bell, who explores the father-daughter competition story through lessons on how to rise from weakness, accept achievement and receive love. Also included are deleted scenes, a gag reel and six voice-over promo trailers for the film.

In this hilarious and idiosyncratic comedy, Carol (Bell) is an underachieving voice coach living in the shadow of her egotistical father Sam (Melamed), the undisputed king of the voice-over industry. When Sam kicks her out, Carol lands her first voice-over job with the help of charming sound engineer Louis (Martin). As romantic sparks begin to fly, Carol finds herself facing a momentous decision when continued job offers put her in head to head competition with her dad.

Written and Directed by Bell, In A World... was produced by Eddie Vaisman, Mark Roberts, Lake Bell and Jett Steiger. Executive producers are Ross Jacobson and Sean King O'Grady.