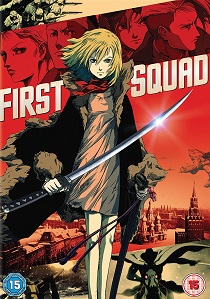 Yoshiharu Ashino's dramatic debut feature Fâsuto Sukuwaddo (in Japanese) tells the compelling and dramatic story of Nadya, a 14-year-old girl who despite her tender years is the last hope for her team and country. Gifted animator Ashino (The Tigger Movie, 101 Dalmations 2: Patch's London Adventure) captures this spectacular and moving story with unique verve aided by the acclaimed animation studio behind The Animatrix and Halo: Legends. Written and produced by Misha Shprits, Aljoscha Klimov and produced by Eiko Tanaka it is a visionary and extraordinary re-imagining of the opening days of World War II.

Anime fans won't want to miss the dynamic storytelling and spectacular visuals of First Squad when it arrives on eye-popping Blu-rayT and DVD this December 26.

Nadya is a very special 14-year-old girl. With amazing psychic powers and trained as an assassin, she is recruited by the Russian army during World War II to become a member of First Squad, a special fighting unit specializing in combating paranormal forces. When she is the last member left standing in a brutal attack, she is returned to the unit for a special project - to bring her comrades back from the dead to fight Von Wolff, a 700-year-old spirit brought back to life to help the Nazis take over the world. First Squad is a compelling and action-packed new animated movie filled with drama and suspense, containing stunning, atmospheric visuals from Studio 4°C, the acclaimed animation studio behind The Animatrix andHalo: Legends.