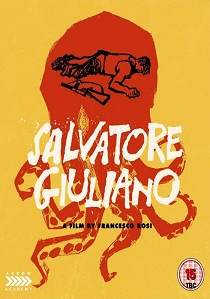 Arrow Video is delighted to announce a limited theatrical run of the upcoming Blu-ray & DVD release Salvatore Giuliano, one of the undisputed classics of Italian 1960s cinema. The film will open in select cinemas across the UK on 26th September 2014 before being released in a new digital transfer on Blu-ray and DVD on 29th September 2014.

This new re-release, featuring a truly astonishing restoration, which was completed in December 2013, will mark the Blu-ray world premiere for Salvatore Giuliano. Martin Scorsese's Film Foundation and the Hollywood Foreign Press Association funded a full-scale 4K makeover involving director Francesco Rosi himself, making this one of the strongest and most impressive restorations of a classic black-and-white Italian film that Arrow Video have released to date.

The disc will also include the 55-minute documentary The Filmmaker and the Labyrinth alongside three shorter interviews which are all exclusive to Arrow Video and were shot in July and August of this year. Each interview looks at Salvatore Giuliano from three contrasting but complementary perspectives: the film's director Francesco Rosi discusses the film itself, the real-life Salvatore Giuliano's nephew Giuseppe talks about the man in the context of Sicilian politics, and journalist and Sicilian Mafia specialist Attilio Bolzoni looks at the links between Giuliano and the Mafia. This supplementary material should allow viewers to not just learn about Rosi's films but also the historical backdrop to the film (which is further explored in the booklet).

5 July 1950. Salvatore Giuliano, Italy's most wanted criminal, is found shot dead in a dusty courtyard. Who killed him, and why? And who was he?

The film that made Francesco Rosi's international reputation, this Citizen Kane-style investigative portrait was originally called Sicily 1943-60, as Rosi sought not so much to depict Giuliano himself as the society from which he sprang, in which the police, the carabinieri and the Mafia all have strong vested interests. Filming in the exact locations and utilising court reports as primary source material, Rosi mainly cast local Sicilians, some of whom knew Giuliano personally. The only professional actors were Frank Wolff (Once Upon a Time in the West) and Salvo Randone (L'Assassino).

Stunningly shot by Gianni di Venanzo (Fellini's 8½), the film was immediately hailed as a masterpiece, with Sight & Sound calling it "one of the most courageous things the Italian cinema has ever attempted". More recently, Martin Scorsese cited it as one of his twelve favourite films, and his Film Foundation sponsored this sparkling new 4K restoration by the Cineteca di Bologna.