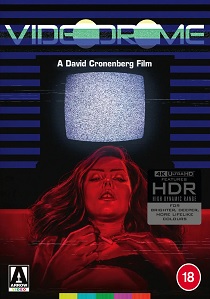 Combining the bio-horror elements of his earlier films whilst anticipating the technological themes of his later work, Videodrome exemplifies David Cronenberg's extraordinary talent for making both visceral and cerebral cinema.

Max Renn (James Woods) is looking for fresh new content for his TV channel when he happens across some illegal S&M style broadcasts called "Videodrome". Embroiling his girlfriend Nick (Deborah Harry) in his search for the source, his journey begins to blur the lines between reality and fantasy as he works his way through sadomasochistic games, shady organisations and body transformations stunningly realised by Oscar-winning makeup effects artist Rick Baker.

Hailed by his contemporaries John Carpenter ("he's better than all of us combined!") and Martin Scorsese ("no one makes films like he does") as a genius, Videodrome was Cronenberg's most mature work to date and still stands as one of his greatest.

With a brand new 4K restoration from the original camera negative of both the full-length director's cut and the US theatrical cut, Videodrome is released on Limited Edition 4K UHD 24th October 2022 from Arrow Video.

HotDVDBDTV
DCI Tom Brannick returns, as the murder of a crooked accountant unravels a trail of greed that threatens to expose the true identity of the legendary assassin, codenamed, Goliath in Bloodlands: Series 2 released on DVD and Blu-ray 14th November 2022 from Dazzler Media. END_OF_DOCUMENT_TOKEN_TO_BE_REPLACED
Top PicksView