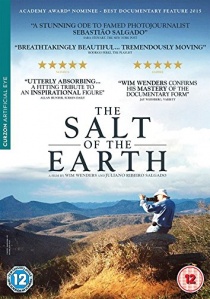 For the last 40 years acclaimed photographer Sebastião Salgado has travelled the world, tracing the footsteps of an ever-changing humanity. He has witnessed and documented many of the major events of our times, taking in wars, famine, genocide and exodus. But now he is embarking on a new journey: to discover pristine territories, grandiose landscapes and wild nature as part of a huge photographic tribute to the planet's beauty.

Salgado's accomplished, moving work and his inspirational life are revealed to us in this Oscar-nominated documentary by his son, Juliano, and world-renowned filmmaker Wim Wenders, himself an avid photographer. Powerful, affecting and truly profound, it is not just a portrait of a great artist but one of life itself.

Nominated for best documentary at the 2015 Oscars, The Salt of the Earth is released on DVD and Blu-ray on 14th September 2015 courtesy of Artificial Eye.

HotBDUHD
Fast forward to the 1980s as Wonder Woman's next big screen adventure finds her facing a wide array of foes including Max Lord and The Cheetah as Wonder Woman 1984 flies in on Blu-ray and 4K UHD 22nd March 2021 from Warner Home Video. END_OF_DOCUMENT_TOKEN_TO_BE_REPLACED
Hot PicksView

Hacksaw Ridge is the extraordinary true story of Desmond Doss who, in Okinawa during the bloodiest battle of WWII, saved 75 men without firing or carrying a gun. He was the only American soldier in WWII to fight on the front lines without a weapon, as he believed that while the war was justified, killing was nevertheless wrong. As an army ...
Movie quote