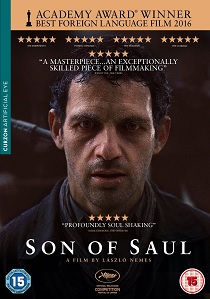 Saul Ausländer is a member of the Sonderkommando, the Jewish prisoners forced to assist in the machinery of the Nazi concentration camps. While at work, he discovers the body of a boy he recognises as his son. As the Sonderkommando plan a rebellion, Saul vows to carry out an impossible task: to save the child's body from the flames and to find a rabbi to recite the mourner's Kaddish and offer the boy a proper burial.

Visceral, gripping and immensely powerful, it is one of the boldest and most remarkable debut features in recent memory and is already being heralded as a masterpiece of world cinema.

Critically acclaimed and the winner of countless awards across the world including Best Foreign Language Film of the Year - Academy Awards 2016, Best Motion Picture in the Foreign Language - Golden Globes 2016 and 4 prizes at Cannes including the Special Grand Jury Prize, Son of Saul is released on DVD on 4th July 2016, courtesy of Curzon Artificial Eye.