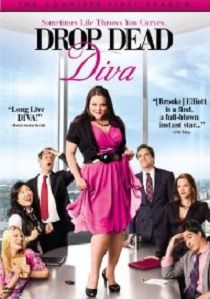 The top-rated and quirky comedic drama series comes to DVD on 28th June 2010 when Sony Pictures Home Entertainment debuts Drop Dead Diva: Season One. This unique series from Sony Pictures Television stars Brooke Elliott (Broadway's Taboo) as a shallow wannabe model who dies in a sudden accident only to find her soul resurfacing in the body of a brilliant, plus-size and recently deceased attorney, Jane.

When Deb, a beautiful-but-vapid model wannabe has a fatal car accident, she suddenly finds herself in front of Heaven's gatekeeper Fred, who declares her a self-centered "zero". Outraged, she attempts to persuade Fred to return her to her shallow existence but is accidentally relegated to the body of the recently deceased Jane Bingum, a brilliant, thoughtful and plus-sized attorney with a loyal assistant, Teri (Cho). Jane has always lived in the shadow of her more glamorous colleagues whereas Deb has always relied on her external beauty. Now, by a twist of fate and a bolt of divine intervention, Deb must come to terms with inhabiting Jane's curvier frame and learn to reconcile her beauty queen ways with her brilliant, new mind.

DVD
For the first time in the cinematic history of Spider-Man, our friendly neighborhood hero's identity is revealed in Spider-Man: No Way Home, released on DVD, Blu-ray and 4K UHD 4th April 2022 from Sony Pictures Home ... END_OF_DOCUMENT_TOKEN_TO_BE_REPLACED
Top PicksView