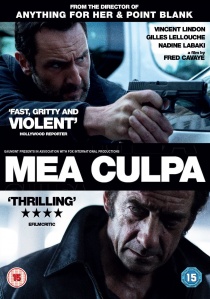 Cops in Toulon, Simon and Franck (Vincent Lindon and Gilles Lellouche) are celebrating the end of an assignment. On their way home, they smash into a car, leaving two fatalities, including one child. Franck is fine. Simon, who was driving drunk, is seriously wounded. He ends up losing it all. His family life. His job as a cop.

Six years later, divorced from his wife Alice, Simon is an armoured car driver. He struggles to keep up the role of father to his son Theo, now nine years old. Franck, who is still a cop, keeps an eye on him from a distance. During a bullfight, Theo witnessing a Mafia killing. In a matter of no time, the thugs are after him. Simon must do whatever it takes to protect his son and find his pursuers. He and Franck team up again... but now they'll have to confront their shared past.

Directed by Fred Cavayé (Anything For Her, Point Blank), the French action thriller Mea Culpa is released on DVD by Metrodome Distribution on 23rd March 2015.