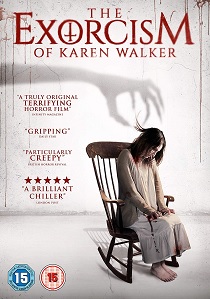 Hereford Horror, the genre wing of UK home entertainment studio Hereford Films, presents the first look at the British key art for its first production, The Exorcism Of Karen Walker, which arrives on DVD and digital on 18th February 2019 courtesy of 4Digital Media.

A delightfully old school horror movie in the tradition of the Hammer and Amicus films of the 1970s, The Exorcism Of Karen Walker is the first film to fully explore the concept of Kirlian photography - a process of photographing a person's 'aura'. Accidentally discovered by Semyon Kirlian in 1939, it has been the subject of much myth and speculation ever since.

In the film, Diane and Mitch Walker inherit a house once owned by Mitch's uncle Alexander, who was ostracised from the family after purportedly abusing Mitch's sister Karen while dabbling with Kirlian photography. Karen has been in a somnambulistic state in an asylum ever since, but Mitch slowly begins to realise that she was not abused: indeed Uncle Alexander was trying to help her as she was possessed by an ancient demon. Enlisting the help of Alexander's one time colleague, renowned psychic Ada Devere, he brings Karen back to the house for a terrifying confrontation with the entity trapped inside her.

The Exorcism Of Karen Walker is produced by movie veteran Jonathan Sothcott, the man responsible for popular Britflicks such as Vendetta and the We Still Kill The Old Way series, and something of a closet horror fan. Formerly Head of Programming for The Horror Channel on Sky, the film was developed from his passion for the classic British horror movies starring Christopher Lee and Peter Cushing, and while The Exorcism Of Karen Walker piles on the scares, it is a character-led, story-driven genre film in the classic style.

The Daily Star calls The Exorcism Of Karen Walker "gripping" while Infinity Magazine says that it is "a truly original, terrifying horror film", and in The Darkside Magazine, Allan Bryce suggests it "gives Blumhouse a run for their money".

DVD
Packed with twists and turns from beginning to end, starring Matt Damon and directed by Academy Award winner Tom McCarthy, Stillwater is available to own on Blu-ray and DVD 6th December 2021 from Universal Pictures (UK). END_OF_DOCUMENT_TOKEN_TO_BE_REPLACED
Top PicksView