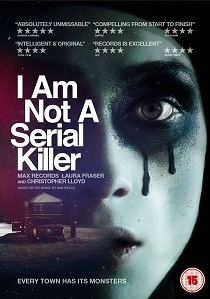 John Wayne Cleaver is dangerous and he knows it. He is 16 and helps his Mum and Aunt at the family Mortuary. John is obsessed with serial killers but really doesn't want to become one. So for his own sake and the safety of those around him he lives by rigid rules to keep himself "good" and "normal".

When somebody starts murdering people in John's small Mid-West town, he has to investigate and risk letting his own dark side out in order to stop the killer. But without his rules to keep him in check he might be more dangerous than the monster he is stalking. As the icy winter tightens its grip on the community a deadly supernatural game of cat and mouse ensues...

Based on the best-selling book by Dan Wells, featuring a star-making lead performance from 17-year-old Max Records and an extraordinary turn from the legendary Christopher Lloyd (Back to the Future, Who Framed Roger Rabbit?), I Am Not A Serial Killer, released on DVD and Blu-ray by Bulldog Film Distribution on 20th February 2017, is the most sheerly entertaining and audaciously offbeat offering since Donnie Darko hit cinema screens.

A big hit when it premiered at the South By Southwest Film Festival in March, and a must-see film at the prestigious BFI London Film Festival, it proves that left field indie cinema is alive and kicking, even if the Clayton County killer's victims aren't. "Hit the switch John..."

DVD
A detective in a small Pennsylvania town investigates a local murder while trying to keep her life from falling apart in Mare of Easttown, released on DVD and Blu-ray 13th September 2021 from Warner ... END_OF_DOCUMENT_TOKEN_TO_BE_REPLACED
Top PicksView