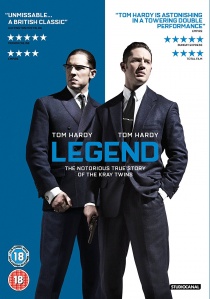 A pair of ruthless upstarts, Reggie and Ronnie Kray, both played by Tom Hardy (Mad Max: Fury Road, The Revenant) have the time of their lives, ruling over London in the middle of the Swinging '60s in Legend, available on Blu-ray and 25th January 2016 from StudioCanal.

In an amazing double-barreled performance, Hardy is mesmerising as the gangster twins, dominating the East End of London for years, until a police investigation, Ronnie's self-destructive tendencies, and the disintegration of Reggie's marriage threaten to destroy the empire they built. An edgy and action-packed true story, Legend on Blu-rayT and DVD also comes with filmmaker commentary and a behind-the-scenes look at the making of this instant classic.

From Academy Award® winner Brian Helgeland (L.A. Confidential, Man on Fire) comes the true story of London's most notorious gangsters, twins Reggie and Ronnie Kray (Tom Hardy, Mad Max: Fury Road). As the brothers rise through the criminal underworld, Ronnie advances the family business with violence and intimidation while Reggie struggles to go legitimate for local girl Frances Shea (Emily Browning, Sucker Punch). In and out of prison, Ronnie's unpredictable tendencies and the slow disintegration of Reggie's marriage threaten to bring the brothers' empire tumbling to the ground.

Legend also stars Emily Browning (Sucker Punch, Pompeii), Taron Egerton (Kingsman: The Secret Service, Testament of Youth), Christopher Eccleston (Thor: The Dark World, The Others), David Thewlis (The Theory of Everything, RED 2) and Chazz Palminteri (The Usual Suspects, A Bronx Tale) also star in the riveting true-crime drama based on The Profession of Violence: The Rise and Fall of the Kray Twins by John Pearson. 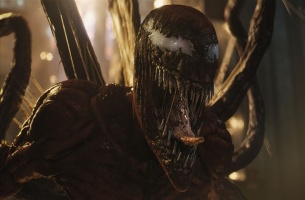