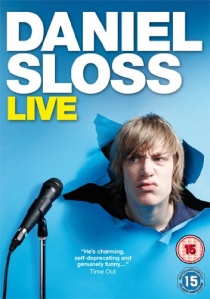 NewsStandup Comedy
News Article Go back to homepage
Scotland's half-man-half-Xbox is proud to announce the highly-anticipated release of Daniel Sloss Live, his debut DVD published by BBC Worldwide on the 2entertain label on 19th November 2012.
Daniel Sloss
Daniel Sloss
2entertain
Unknown
19/11/2012
Thank you for supporting DVD365.net when you order using the link(s) below. As an Amazon Associate we earn from qualifying purchases
Buy DVD
Information

Scotland's half-man-half-Xbox is proud to announce the highly-anticipated release of Daniel Sloss Live, his debut DVD published by BBC Worldwide on the 2entertain label on 19th November 2012. One of the youngest stand-up comedians to come out of the UK in recent years, Daniel has been hailed as a comedic force of nature since he first stepped onto a stage in his mid-teens.

Recorded in front of a sold out live audience at Glasgow's iconic King's Theatre in March this year, this DVD features 75 minutes of the cream of Daniel's material from the past 5 years, which, when you consider that he is still only 21, is pretty impressive.

Daniel started performing stand-up aged only sixteen and has appeared on shows including Michael McIntyre's Comedy Roadshow, 8 Out Of 10 Cats, Jason Manford's Comedy Rocks, The Rob Brydon Show, Comic Relief's Mock The Week, The Paul O'Grady Show and 2012's Stand Up For Sport Relief as well as starring in his own BBC show, The Adventures Of Daniel.

.And all before he started to shave.

In August 2008, at just 17, Daniel became one of the youngest-ever finalists in the premiere national comedy competition So You Think You're Funny? The following year his debut solo show, Teenage Kicks, premiered at the Edinburgh Fringe, selling out every night and then transferred to London for his debut in the Capital at the prestigious Soho Theatre (making him the youngest-ever stand-up to perform solo at the theatre and in the West End.) That September he also made his national television debut as the first stand up to perform on Channel 4's Paul O'Grady Show. His second solo show, My Generation also sold out its Edinburgh run and went on to tour the UK. 2011 saw his new show The Joker, become a massive hit, selling every seat throughout the Edinburgh Festival Fringe in a 400 seat venue and subsequently touring with Live Nation to over 50 UK venues.

He won Best New Comedian at the Scottish Variety Awards 2011 and has toured internationally in Europe, South East Asia and Australia, where in March 2012 he made his third successful appearance at the Sydney Comedy Festival. He is also a popular regular guest on Radio 1's Nick Grimshaw Show.

In July 2012 Daniel became one of very few comedians invited to perform a solo season at the prestigious Montreal Just For Laughs comedy festival, receiving great acclaim. This autumn - following another smash hit Edinburgh Fringe season with his 4th solo show succinctly named The Show (at the prestigious Edinburgh International Conference Centre) - Daniel travels to LA to record the improvised stand-up show Set List for Sky Living before a massive 52 date UK tour and an appearance on Russell Howard's Good News on BBC3.

UHD
A decade-defining classic from the imagination of Steven Spielberg and Chris Columbus, celebrating its 35 year anniversary, The Goonies is released on 4K UHD 31st August 2020 from Warner Home Video. END_OF_DOCUMENT_TOKEN_TO_BE_REPLACED
Top PicksView