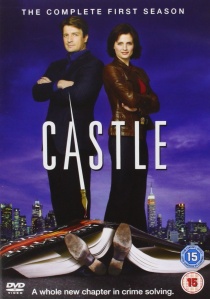 Get on the beat with a new hit drama. Loaded with provocative banter and a talented cast, starring Nathan Fillion and Stana Katic, Castle: The Complete First Season is released on DVD by Walt Disney Studios Home Entertainment on 21st November 2011. The three-disc set includes every episode of this audience favorite's first season as well as exclusive bonus features that give fans an intriguing peek at the making of this witty and suspenseful one-hour dramedy, plus a season's worth of bloopers and extended scenes.

A bestselling novelist (Nathan Fillion) and a New York City detective (Stana Katic) delve into real world crime, starting with a copycat killer who recreates the murder scenes depicted in his novels. Finding true life mysteries more stimulating than fiction, writer Richard Castle continues to offer his professional insights to Detective Kate Beckett... whether she wants them or not. Sparks fly and a hint of romance hangs in the air as these two strong personalities investigate some of the most puzzling crimes on the NYPD's docket.

UHD
Pixar Animation Studios serves up a breakthrough comedy with something for everyone as Ratatouille arrives for the first time on 4K Ultra HD 26th July 2021, exclusive to Zavvi. END_OF_DOCUMENT_TOKEN_TO_BE_REPLACED
Top PicksView