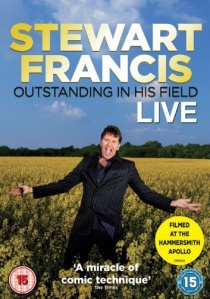 NewsStandup Comedy
News Article Go back to homepage
Stewart Francis is back! After being awarded this year's funniest joke of the Edinburgh fringe, he's on the road and has a brand new DVD, Stewart Francis Live : Outstanding in his Field, released on DVD by 2entertain from 26th Novemeber 2012.
Stewart Francis
Matt Askem
2entertain
Unknown
26/11/2012
Thank you for supporting DVD365.net when you order using the link(s) below. As an Amazon Associate we earn from qualifying purchases
Buy DVD
Information

Stewart Francis is back! After being awarded this year's funniest joke of the Edinburgh fringe (by TV Channel Dave), he's on the road and has a brand new DVD, Stewart Francis Live : Outstanding in his Field, released on DVD by 2entertain from 26th Novemeber 2012 and in time for Christmas.

This specially-filmed performance of the 2012 stand-up show at the Hammersmith Apollo from the killer-gag purveyor features a brand new crop of brilliant one-liners and wisecracks. Delivering devastating jokes at maximum laughs-per-minute, Francis continues to earn rave reviews from critics and fans. Having regularly stolen the show on the BBC's Mock the Week, Michael McIntyre's Comedy Roadshow and Live at The Apollo, he has established himself as a premier league comedian and has produced one of the year's most eagerly-awaited comedy DVDs.

Stewart moved to the UK from his native 'Canadia' three years ago. It wasn't long before he established himself as a brilliant stand-up, routinely performing on television and touring some of the country's largest venues. Stewart loves living this side of the pond but has noticed some of the UK's oddest pastimes and once said: What's the deal with trainspotters. I spotted 47 of the losers the other day.

An accomplished actor, writer and comedian, Stewart has performed his slick, perfectly timed wealth of gags all over the world from the US to South Africa.

DVD
In Brian And Charles, released on DVD and Blu-ray 10th October 2022 from Mediumrare, an inventor lives alone in a remote village in the countryside, inventing useless things out of found objects in his garage. That is until ... END_OF_DOCUMENT_TOKEN_TO_BE_REPLACED
Top PicksView