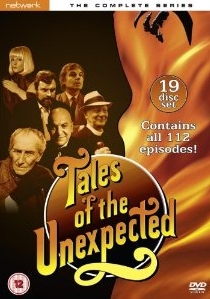 Tales Of The Unexpected: The Complete Series (1979)

Stories from writers such as Roald Dahl and Somerset Maughan are brought to life in the spine-chilling Tales Of The Unexpected: The Complete Series, a 19-disc DVD release by Network out on 6th October 2008.

Sinister and with a touch of the macabre Tales of the Unexpected holds, at its heart, a core of black humour that makes each story both compelling and surprising, with a twist in each tale that delighted audiences throughout the country. Although Roald Dahl is best known for his children's books, his most famous and sinister adult creation was Tales of the Unexpected. Adapting works from Dahl himself, Patricia Highsmith, Ruth Rendell and a host of other celebrated writers, this highly acclaimed series ran for an impressive nine years from its first transmission on ITV in 1979.

Its iconic title sequence and haunting theme tune (from prolific TV composer Ron Grainer) ensured that Tales of the Unexpected was memorable viewing. The series attracted an astonishing array of guest stars: Oscar winners Sir John Gielgud and José Ferrer, Ian Holm, Joan Collins, Sir John Mills, Peter Bowles, Derek Jacobi, Sian Phillips, Denholm Elliott, Zoe Wanamaker, Joss Ackland and Brian Blessed are just a few of the names to feature in its illustrious cast. Sometimes gory, but always surprising, the stories all have a twist to entertain and, more often than not, shock the viewer.

This set contains every episode of Tales of the Unexpected, originally transmitted between 1979 and 1988.

Tales of the Unexpected - Series 1

Tales of the Unexpected - Series 2

Tales of the Unexpected - Series 3

Tales of the Unexpected - Series 4

Tales of the Unexpected - Series 5

Tales of the Unexpected - Series 6

Tales of the Unexpected - Series 7

Tales of the Unexpected - Series 8

Related Articles
My Generation, Molly Moon And The Incredible Book Of Hypnotism, The Royals: Season 1, Dynasty: Seasons 1 and 2, Hawaii Five-0: Season 9, The Loss Adjuster
Zombie Flesh Eaters, The Night Child, Beyond the Door
Woman In A Dressing Gown
The Woman in Black
Comments
Hot Pick

HotBD
Two of Britain's most notorious brothers The Krays were taken on by another famous pair of siblings The Kemps in Peter Medak's big screen gangster biopic set for a Limited Edition Blu-ray release from Second Sight Films on 12th July 2021. END_OF_DOCUMENT_TOKEN_TO_BE_REPLACED
Top PicksView