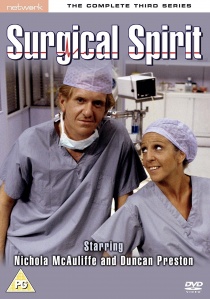 Consultant surgeon Sheila Sabatini rules her operating theatre with a sharp tongue and a withering sense of humour. Her dedication and determination to succeed in a male-dominated world make her a force to be reckoned with, and her colleagues at the Gillies Hospital have learned the hard way not to mess with her!

Sheila's intimidating manner may hide a soft centre, but only those who dare to get close enough discover that; they include administrator and best friend, Joyce, and anaesthetist Dr Haslam, a man brave enough to pursue a romantic relationship with the spiky Mrs Sabatini, Nicola McAuliffe gives a memorable performance as Sheila Sabatini, with Duncan Preston starring alongside her as Jonathan Haslam.

Surgical Spirit was a huge success with the viewing public, running for seven series between 1989 and 1995. This complete third series (which also features an early appearance from Catherine Tate) was originally screened in 1991.

DVD
For the first time in the cinematic history of Spider-Man, our friendly neighborhood hero's identity is revealed in Spider-Man: No Way Home, released on DVD, Blu-ray and 4K UHD 4th April 2022 from Sony Pictures Home ... END_OF_DOCUMENT_TOKEN_TO_BE_REPLACED
Top PicksView