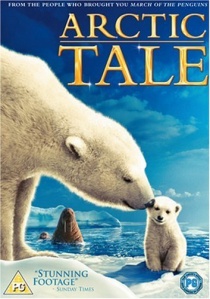 In this heart-warming film that follows the real-life adventure of two animal friends, Arctic Tale portrays the wild beauty of the Arctic and its inhabitants, available on DVD on 8th September 2008 from Paramount Home Entertainment. From National Geographic Films, the producers of March of the Penguins, and Paramount Vantage, the studio that brought you An Inconvenient Truth, Arctic Tale follows the story of Nanu, a polar bear cub and Seela, a walrus pup, through their exhilarating and moving struggles for survival.

Brought to life by narrator Queen Latifah, viewers will be entranced as she tells the story of two very different Arctic creatures who live in this vast snow kingdom at the top of the world. Armed only with their natural instincts and mothers' guidance, these inspiring animals face countless trials and challenges in a beautiful icebound world that is rapidly melting beneath them.

The Arctic Tale DVD features some truly special extra features, including the aking of Arctic Tale, a behind-the-scenes look at the years of extraordinary work that went into capturing the unforgettable images in the film. In addition, the paper that Paramount is using in the DVD packaging is made from 30% post-consumer waste. Also included is Are We There Yet? World Adventure: Polar Bear Spotting, a production of Sinking Ship and National Geographic Kids Entertainment. In this episode, two children embark on a thrilling adventure to view polar bears up close!

Offering child and family-friendly entertainment, this DVD makes the ideal back-to-school gift that all the family can enjoy.

DVD
The BAFTA-winning hit Unforgotten, released on DVD 26th April 2021 from BBC Worldwide, returns for a fourth series, as Cassie and Sunny investigate a cold case with alarming links to the police force. END_OF_DOCUMENT_TOKEN_TO_BE_REPLACED
Top PicksView