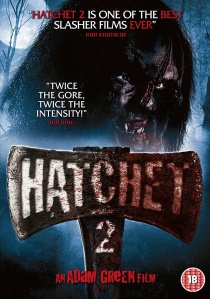 Increasing the body count, the gore levels and the homicidal ingenuity of his cult horror hit Hatchet, writer-director Adam Green (Frozen; Hatchet; Spiral) throws his splatter generator into overdrive and somehow manages to out-slash every other slasher movie ever made with Hatchet 2, coming to DVD and Blu-ray on 29th August 2011 from Arrow Films.

Starring Danielle Harris (Stake Land; Halloween I and II), Tony Todd (Candyman), Kane Hodder (the face behind the mask of Jason Vorhees in the Friday The 13th series) and Tom Holland (writer-director of Fright Night and Child's Play) and featuring fan-pleasing cameos by "Frozen" stars Shawn Ashmore (the X-Men trilogy) and Emma Bell (The Walking Dead) amongst others, the film sees vengeful supernatural killing machine Victor Crowley coming up with ever more inventive ways of dispatching anyone who dares trespass on his little patch of the Louisiana swamplands.

More a "continuation" than a sequel, Hatchet 2 picks up at the very moment the first movie ended, with feisty heroine Marybeth (Harris) held firmly in the deformed Crowley's clutches and facing a very watery grave. A bit of gruesome eye gouging sees her managing to escape to comparative civilization, where she winds up at the premises of voodoo shop proprietor and illegal swamp boat tour operator Reverend Zombie (Todd). After telling him that Victor Crowley is far from dead and explaining she wants to return to the swamp to retrieve the bodies of her late father and brother, Marybeth convinces the Reverend to accompany her on a journey back to the Crowley shack. Eyeing an opportunity to serve his own needs with regards to the swamp and the Crowley legend, the Reverend sets about recruiting a hardened bunch of hunters to join him and Marybeth on a one-way cruise into the very heart of darkness.

Full of "gore of great quality and quantity [with] enough viscera on display to please even the most debauched Fangoria subscriber" (The Onion), Hatchet 2 is a playful, witty, affectionate and uncompromisingly graphic homage to one of the most popular of horror movie sub-genres. And if you think you've seen all the ways a victim can die in a slasher movie, then think again. Victor Crowley knows more than most and he's only just started.