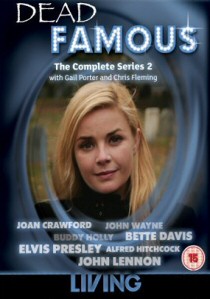 Gail Porter and paranormal investigator Chris Fleming travel across America in search of the worlds most famous celebrity ghosts as Dead Famous - The Complete Series 2 comes to DVD from Contender Home Entertainment on 9th April 2007.

All ten episodes of the ratings winning second series shown on Living will be presented across this three disc set. This time around our investigators unlock the stories of the infamous (Bonnie and Clyde), Hollywood legends (John Wayne, Jayne Mansfield) and musical geniuses (John Lennon, Buddy Holly). Gail and Chris go in search of two warring Hollywood legends when they attempt to make contact with Joan Crawford and Bette Davis. Exploring the famous Raleigh Studios, the setting for the film Whatever Happened to Baby Jane?, they capture something intriguing on their camera. But is it one of the screen icons?

Remember the creepy old schoolhouse from the thriller The Birds? Gail and Chris won't forget it in a hurry after the weird goings-on they encountered there in search of the spirit of Alfred Hitchcock. Searching for the ghost of Harry Houdini our duo visit the Eastern State Penitentiary, the blueprint for modern escape-proof prisons, where the man known as The Jailbreak King might still be tampering with the locks, and the 103-ghost Palace Theatre on Broadway where Houdini performed in the vaudeville era. But could the man no jail hold be captured by the cameras?

Gail and Chris, displaying true grit, travel to Tombstone in Arizona - the setting for several of John Wayne's films - and attempt to unearth the spirit of the giant of Western movies. Alone at night in Boot Hill Cemetery, they examine their photographs and find that a pair of eyes had been staring at them out of the darkness. There was no-one else there... at least, no-one who was alive! 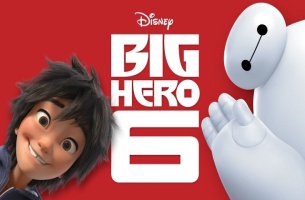 HotUHD
With all the heart and humour audiences expect from Walt Disney Animation Studios, Big Hero 6, released on 4K UHD for the first time 30th August 2021 and exclusive to Zavvi, introduces you to a lovable robot who will change your world. END_OF_DOCUMENT_TOKEN_TO_BE_REPLACED
Comments
BD Releases News Pick

BD
After more than thirty years of service as one of the Navy's top aviators, Pete 'Maverick' Mitchell is back where he belongs as Top Gun: Maverick flies onto DVD, Blu-ray and 4K UHD 31st October 2022 from Paramount Home ... END_OF_DOCUMENT_TOKEN_TO_BE_REPLACED
Top PicksView