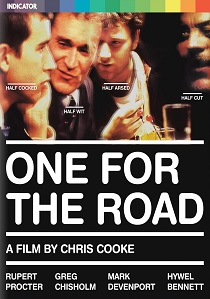 NewsComedyDrama
News Article Go back to homepage
A darkly comic satire on male fragility, Chris Cooke's One for the Road, released on Blu-ray as a limited edition 25th April 2022 from Powerhouse Films, is one of the great, unsung British films of the 21st century.
Rupert Procter, Greg Chisholm, Mark Devenport, Hywel Bennett, Micaiah Dring
Chris Cooke
Kate Ogborn
Powerhouse Films
1 hour 33 minutes
25/04/2022
#OneForTheRoad
Thank you for supporting DVD365.net when you order using the link(s) below. As an Amazon Associate we earn from qualifying purchases
Buy BD
Information

Four men with little in common, other than their attendance of an alcohol rehabilitation course, bond over their love of booze at a nearby pub between sessions. Between pints and bouts of delusion and depression, three of the men hatch a plan to get money out of the fourth - a mansion-dwelling millionaire played by the great Hywel Bennett (Shelley) in his final feature film role.

A darkly comic satire on male fragility, Chris Cooke's One for the Road is one of the great, unsung British films of the twenty-first century. Made in Nottingham using early digital cameras - utilising a beer-soaked, cigarette-stained palette - it avoids the clichés associated with British cinema and embraces the do-anything nature of its chosen format to become its own, distinct work. The film also showcases a fine ensemble of acting talent in not only Bennett, but also Rupert Procter, Greg Chisholm, Mark Devenport, Micaiah Dring and Johann Myers.

This limited edition, world premiere Blu-ray release is produced from a new high definition restoration of the film, complete with its original 5.1 surround sound and 2.0 stereo audio tracks and is released 25th April 2022 from Powerhouse Films.

UHD
From the Wachowski brothers and Joel Silver, the masterminds behind The Matrix trilogy, comes another intriguing, action-packed fantasy-thriller in V for Vendetta, released on 4K UHD 2nd November 2020 from Warner Home Video. END_OF_DOCUMENT_TOKEN_TO_BE_REPLACED
Top PicksView