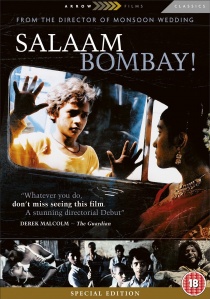 Winner of the Camera d'Or (for best first feature film) and the Audience Award at the 1988 Cannes Film Festival - and nominated for an Academy Award, a BAFTA Award and a Golden Globe for Best Foreign Language Film - Salaam Bombay! comes to DVD in March as a Special Edition release featuring an audio commentary by Nair plus five featurettes that include interviews with leading cast members and the film's screenwriter.

Nair's wrenching drama tells the story of 11-year-old Krishna (played by real-life street child Shafiq Syed) who, abandoned by his brother and single mother, heads to Bombay and joins a sea of homeless children and down-and-out adults struggling to get by on the city's pitiless streets. Taking a job as a tea boy in the hope of earning 500 rupees to take home to his mother, he soon begins to learn the street smarts needed to survive amongst the prostitutes, pimps, small-time crooks, drug addicts and dealers. It is in this unlikely setting that Krishna eventually finds love and companionship, but it proves to be an experience that takes a huge emotional toll on him.

A gritty look into the underbelly of Bombay's urban streets Salaam Bombay! allows the viewer a peek at another culture, only to find that basic human needs and desires are universal. And featuring a cast that stars real-life street kids alongside veteran Indian actors, Mira Nair's exceptional first feature boasts an authenticity to which the similarly themed "Slumdog Millionaire" can only aspire.