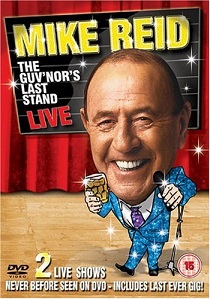 NewsStandup Comedy
News Article Go back to homepage
The final stand up performance from the legendary and greatest adult comedian of all time finally sees its release in this extra special and poignant DVD of Mike 'Frank Butcher' Reid performing his incredible renowned stand up shows, released by Anchor Bay UK on 20th December 2008.
Mike Reid
Anchor Bay UK
Unknown
20/12/2008
Thank you for supporting DVD365.net when you order using the link(s) below. As an Amazon Associate we earn from qualifying purchases
Buy DVD
Information

The final stand up performance from the legendary and greatest adult comedian of all time finally sees its release in this extra special and poignant DVD of Mike 'Frank Butcher' Reid performing his incredible renowned stand up shows, released by Anchor Bay UK on 20th December 2008.

The exclusive footage features the talented Mike on stage at both the Cliff Pavillion, Southend (2006) and at Bury Cottage, Stanstead (Nov 2006), which was the last ever live recorded footage of Mike doing what he did best, making people laugh. Mike's performances truly show that he was still performing at the peak of his power and that he can be seen in the same light alongside the all time greats of British stand-up comedy. Born in Hackney, East London in 1940, Mike first got into entertainment as a stand up comedian in clubs and cruise liners in the 60s, before landing a part on ITV's hit 70s show, The Comedians, along with the likes of Bernard Manning, Frank Carson, and Charlie Williams. Mike continued in his career as host of hectic children's game show Runaround in the 70's.

In 1975 Mike cemented his popularity with the public with his one-off hit record The Ugly Duckling. However, international fame came to Mike in 1987 with the introduction of his Frank Butcher character into Eastenders. Frank Butcher has gone down in history as one of television's funniest and most endearing characters. In 2000, Mike left Eastenders but still showed he was in the public's conscience with his turn as Doug the Head in the Guy Ritchie gangster film Snatch.

Mike continued to tour as a stand-up comedian throughout his 40 year showbiz career and was immensely popular with crowds throughout the UK. This raw, genuine footage portrays stand up at its best; Mike's quick fire wit and razor sharp tongue will have you roaring with laughter and remind you why he's everyone's favourite East End geezer.

Two hilarious live stand up shows, on one brand new DVD. Mike Reid Live, The Guv'nor's Last Stand is a must have and a great gift for fans of comedy and of the much loved, late comedian and TV legend, Mike Reid.

UHD
From the Wachowski brothers and Joel Silver, the masterminds behind The Matrix trilogy, comes another intriguing, action-packed fantasy-thriller in V for Vendetta, released on 4K UHD 2nd November 2020 from Warner Home Video. END_OF_DOCUMENT_TOKEN_TO_BE_REPLACED
Top PicksView