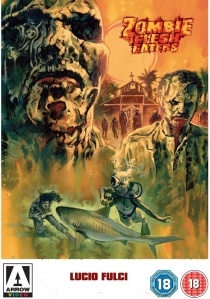 Painstakingly restored from the original camera negative, Zombie Flesh Eaters stands-out as one of the famed distributor's biggest ever (and best looking) restoration projects. These landmark releases will contain a wealth of special features, additional collector's material and never-before-seen extras, including optional English / Italian opening titles, a UK exclusive introduction to the film from lead actor Ian McCulloch and a number of brand new featurettes.

Available as a Limited Edition Steelbook (complete with limited edition artwork), Limited Edition Slipbox (with 4 alternate artworks - available exclusively from arrowfilms.co.uk) and as standard edition Blu-ray and DVD, a complete list of the special features included in these highly anticipated Zombie Flesh Eaters releases is as follows:

Hailing from the now infamous "Video Nasty" era of horror films, Zombie Flesh Eaters became an unstoppable cult hit upon its release in 1979. The film divided opinion across the globe and came up against opposition in many territories for the sheer amount of bloody content and its high gore-factor.

The original cut of Zombie Flesh Eaters was banned in the UK upon release and the film that appeared in cinemas was an edited version with a full 2 minutes of brutality stripped out to get past the classification board. These new high definition restored editions contain the full unedited film, as Fulci made them to be seen.

Both Zombie Flesh Eaters star Ian McCulloch and the man behind the amazing restoration, James White, will be available for interviews, please contact Will Taylor at Noble PR for opportunities, contact details are at the bottom of this release.

An abandoned boat in New York Harbour unleashes a deadly flesh crazed Zombie cargo... A Young American woman and a journalist investigate a tropical island where a deadly disease is making the dead walk... Soon, thoughts of getting to the bottom of the murderous curse will be forgotten, as Fulci's walking corpses overwhelm the living and reports come in that the Big Apple is swarming with the living dead...

Still, after more than thirty years, Zombie Flesh Eaters still has the power to shock and offend the unwilling... Check out this classic 'sadist video' and revel in a wonderfully offensive movie that once helped usher in a moral panic!

Related Articles
Zombi Holocaust, Contamination
The Night Child, Tales Of The Unexpected: The Complete Series, Beyond the Door
City Of The Living Dead, The Psychic
Comments
BD Releases News Pick

BD
Finding praise from critics around the world, Boyhood, following the life of Mason, from early childhood to his arrival at college, is released on Blu-ray and 4K UHD 27th March 2023 from Arrow Films. END_OF_DOCUMENT_TOKEN_TO_BE_REPLACED
Top PicksView