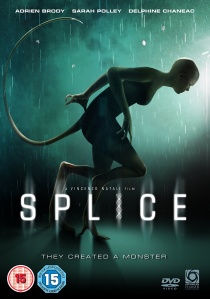 From the director of Cube and the genius mind of producer Guillermo Del Toro comes Splice, a bold and refreshing psychological thriller that is available on DVD and Blu-ray from 29th November 2010 courtesy of Optimum Home Entertainment.

Starring Oscar-winner Adrien Brody (King Kong, The Pianist) and Oscar-nominee Sarah Polley (Go, Me Without You), Splice is the story of two brilliant young scientists who have engineered a brand new species within the confines of their laboratory. Rebel superstars of the scientific world, the pair revel in their success as the new creature continues to gain them attention and notoriety. However, unbeknown to their peers, the scientists introduced human DNA into the experiment and the creature they have created is both greater than the sum of its parts and much more unpredictable as a result.

The pair believes that the animal-human hybrid is a step up the evolutionary ladder but the creature undergoes a final, shocking metamorphosis. Suddenly their lives and the lives of everyone around them are thrown into danger as the previously obedient creation threatens to destroy the very people who created her.

Splice is a chilling vision of what could come, an effective science fiction thriller and a terrifying psychological journey instantly befitting of the minds behind it. Packed with fascinating extra features, Splice is this year's must-see chiller, with it's shocking denouement remaining imprinted on the mind long after the final credits have rolled.

DVD
Released on DVD 4th April 2022 from BBC Worldwide, Golden Globe, Emmy and BAFTA winner Ben Whishaw stars in This Is Going To Hurt, Adam Kay's adaptation of his best-selling memoir about life as a junior doctor. END_OF_DOCUMENT_TOKEN_TO_BE_REPLACED
Top PicksView