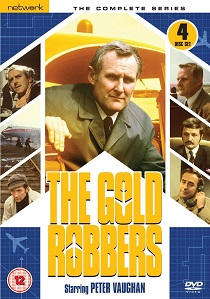 The Gold Robbers: The Complete Series (1969)

This dynamic and tightly scripted drama centres on the search for the perpetrators of a multi-million-pound gold bullion robbery; Peter Vaughan stars as the C.I.D. officer doggedly tracking down all those who hold clues to the identity of the mastermind behind the raid. Vaughan's strong performance is supported by some of the key dramatic actors of the late '60s, including Joss Ackland, Alfred Lynch, George Cole, Bernard Hepton, George Innes, Roy Dotrice and Peter Bowles.

Arthur Butler, the former Scotland Yard officer who had worked on the investigation into the Great Train Robbery, acted as technical adviser on the series, and it earned acclaimed producer and screenwriter John Hawkesworth (Upstairs, Downstairs) a BAFTA nomination for Best Drama Series; among a celebrated team of writers were former Z Cars contributors Alan Prior and Eric Coltart.

The Gold Robbers originally aired in 1969 and all thirteen episodes of this much sought-after drama, as well as the feature-length repeat edit of the final two episodes, are included in this set.