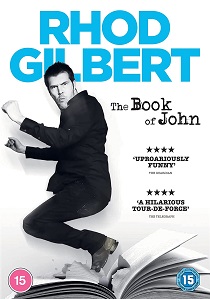 Rhod Gilbert is a Welsh stand-up comedian and presenter who started working as a comic in 2002, quickly rising to success and national fame. He has hosted numerous TV comedy series and enjoyed radio success with his own sitcom, as well as touring to popular acclaim and has released a number of successful stand-up DVDs.

Filmed live at the Wales Millennium Centre in Cardiff, The Book Of John is the sold out, highly anticipated new (2022) show from comedian Rhod Gilbert, which critics have called "uproariously funny".

Raw, personal and brutally honest like never before, Rhod takes us on a no-nonsense journey into finding the humour when you've hit rock bottom.

And just when you think things can't get any worse, you meet a bloke ... a bloke called John.

Rhod Gilbert - The Book Of John is released on DVD 14th November 2022 from Universal Pictures (UK).