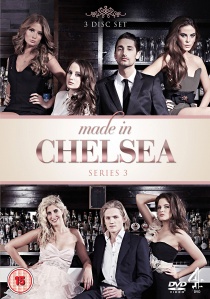 Catch up with the champagne swilling socialites in Series 3 & Series 1-3 box set of the "Totes Amaze" Made in Chelsea, out to own on DVD from 15th October 2012 from Channel 4 DVD.

Available to own on for the first time on DVD from 15th October 2012, the beautiful and affluent Chelsea players are back for a third series of Made in Chelsea; following the lives, loves and dramas of SW3's finest inhabitants as they party amongst London's most elite social circuits. And it's all change for the MIC gang...

Caggie's back from Australia with a mystery man's name tattooed on her wrist, much to the disappointment of on/off love Spencer. But when she leaves to go on tour, Chelsea's favourite playboy, Spencer, wastes no time in moving on to the next girl, Louise; the same girl his best friend Jamie has fallen for. Soon the three of them find themselves embroiled in a complex love triangle that threatens the boys' friendship forever.

Hot new girl Kimberley causes a stir when the men of Chelsea wage a war for her affections, but it's self-made millionaire Richard who catches her eye. Things take a dark turn when Cheska suspects she's not all she seems and goes on a mission to uncover the 'real' Kimberley.

Meanwhile, serial heart-breaker Hugo has finally found true love with his new girlfriend Natalie and is spending less time with the boys. Millie starts an exciting new internship at Glamour Magazine, but things get even rockier between her and ex-best friend Rosie as she begins to wonder if they will they ever make amends.

After a disastrous year with women, Ollie finally decides to turn his attentions to men and takes his bisexuality out for a test run. Will he find love or will he fall flat on his face?

Featuring a whole feast of exclusive MIC extras, including interviews with the cast, behind-the-scenes sneak peeks and a skateboarding master class from all-round guru and Chelsea cast member Francis Boulle, this third series of Made in Chelsea is not to be missed on DVD! And if you just can't get enough Chelsea action, watch all the drama unfold from the very beginning with the complete Series 1-3 box set, charting the turbulent lives of Chelsea's elite from the word go. With bitch fights and break ups galore, it's a must-have buy for all MIC fans!

Hearts continue to break, heels remain high and the only things sharper than their suits are their tongues: Made in Chelsea Series 3 & Series 1-3 box set - prepare for a few posh feathers to be truly ruffled!