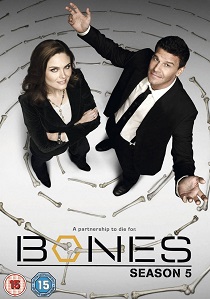 Starring Emily Deschanel (Cold Mountain, Spider Man 2) as Dr. Temperance Brennan and David Boreanaz (Angel, Buffy The Vampire Slayer) as FBI Agent Seeley Booth, the highly anticipated fifth season of Bones is brimming with more exciting plot twists and electrifying sexual chemistry than ever before. Inspired by real-life forensic anthropologist and best-selling novelist Kathy Reichs, Bones Season 5 is sure to once again please with mystery, heart and character at the centre of this darkly amusing cult series. Bones fans can also catch up on series past with the complete DVD box-set (Seasons 1-5), released on the same date.

As Season 5 commences, Booth and Brennan contend with the emotional fallout brought about by events at the end of last season. Brennan's request to have Booth father her child has complicated things, and the almost psychic link they shared during Booth's coma has left them both wondering. While Booth endeavors to get to grips with these new emotions, Brennan insists the two of them focus their attention and energy on their job; catching murderers and solving the crimes that no one else can.

As the series unfolds, Brennan moves on romantically, leading Booth to propose to Daisy (Carla Gallo; Get Him to the Greek, Mad Men), and in the heart-rending 100th episode Booth finally lays his cards on the table and reveals to Brennan just how much she means to him. Alongside the brilliant Deschanel and Boreanaz, returning Bones stars include Stephen Fry (QI, Gosford Park) as Dr Gordan Hyatt along with Michaela Conlin (Law and Order, Enchanted) as Angela Montenegro, T.J.Thyne (24, CSI) as Dr Jack Hodgins, and Tamara Taylor (Lost) as Dr. Camille Saroyan.

With a hilarious gag reel, extended episodes and behind-the-scenes featurettes Bones Season 5 on DVD and Blu-ray and Bones Complete Seasons 1-5 DVD box-set make for the perfect night in this Autumn, released on 18th October 2010 from Twentieth Century Fox Home Entertainment.

UHD
With a mission of building from scratch an entirely new race car with the potential to defeat Ferrari at the 1966 Le Mans World Championship, att Damon and Christian Bale star in Le Mans '66,released ... END_OF_DOCUMENT_TOKEN_TO_BE_REPLACED
Hot PicksView