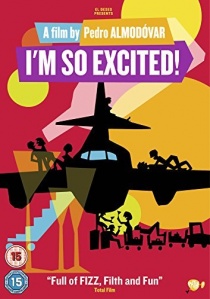 When a moment's negligence endangers a flight en route to Mexico City, three wildly flamboyant flight attendants (Carlos Areces, Raúl Arévalo and Javier Cámara) endeavour to keep the passengers happy and in the dark until they can find a solution.

The economy class has been put to sleep for their own comfort, but the business class, which includes a shady Spanish banker, a clairvoyant virgin, an actor and a mysterious security agent, proves more difficult to subdue.

When the news of impending danger finally spills, it produces a somewhat unexpected reaction. Rather than panic, a frenzied torrent of over-the-top and uproariously funny debauchery ensues. Liberated by the prospect of death, the passengers dispose of all their inhibitions and dive headfirst into a hedonistic haze.

Showcasing the celebrated Spanish auteur at his camp best, I'm So Excited, released on DVD and Blu-ray on 26th August 2013 by Twentieth Century Fox Home Entertainment, also features charming cameos by Antonio Banderas and Penelope Cruz as a klutzy husband and wife duo. Almodóvar's comedy is rife with symbolism and metaphor aligned with present-day Spain, but the film is entertainment at its best, first and foremost.

Related Articles
Machete Kills, Black Butterfly, Acts Of Vengeance, Unchained, Security, Knight of Cups, The 33, The Spongebob Movie: Sponge Out Of Water, Justin and the Knights of Valour, Ruby Sparks, Haywire, Puss In Boots, The Big Bang, The Skin I Live In, My Spy, The Mask of Zorro, Spy Kids, The Music of Silence, Life Itself, Pain & Glory, Dolittle, The Hitman's Wife's Bodyguard, Uncharted
For your consideration 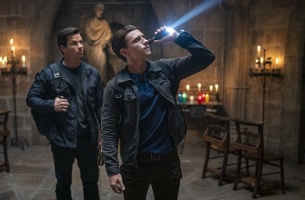