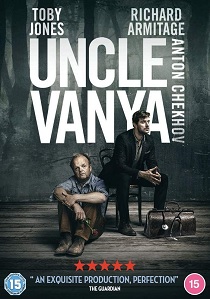 In the heat of summer, Sonya (Aimee Lou Wood) and her Uncle Vanya (Toby Jones) while away their days on a crumbling estate deep in the countryside, visited occasionally only by the local doctor Astrov (Richard Armitage). However, when Sonya's father Professor Serebryakov (Roger Allam) suddenly returns with his restless, alluring, new wife Yelena (Rosalind Eleazar) declaring his intention to sell the house, the polite facades crumble and long repressed feelings start to emerge with devastating consequences.

Critically acclaimed by both the press and public, Uncle Vanya played to sold out houses each night, before it was shut down as a result of the COVID-19 pandemic. During these unprecedented times, witness this extraordinary cast return to the Harold Pinter Theatre in a way that fuses the power of theatre and screen.