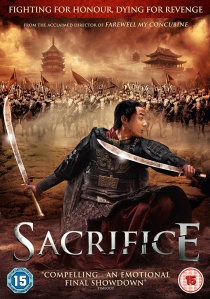 From one of China's most influential directors Chen Kaige (Farewell My Concubine, The Promise) comes Sacrifice, an epic tale of paternal love and retribution. Starring a stellar cast including award-winning actors Wang Xueqi (Bodyguards and Assassins) and Ge You (To Live) and amazing sets, this breathtaking film makes its DVD debut on 20th May 2013, courtesy of High Fliers Films.

The Zhao clan has held powerful and influential positions for generations and now Zhao Dun is Prime Minister and his son Zhao Shuo is a general in the army who is married to the King's sister. Tu'an Gu (Wang Xueqi) their mortal enemy is determined to overthrow them, he plans a military coup leading to the slaughter of the entire clan, or so he thinks.

A lone Zhao baby miraculously survives the savagery and with the help of the family doctor, Cheng Ying (Ge You), is smuggled out and taken to live with him, his wife (Hai Qing) and their own new born son. After more bloodshed, Cheng Ying raises the child as his own and bides his times to wreak revenge on the evil tyrant.

With stunning battles and intense drama, Sacrifice is a gripping and moving epic saga.