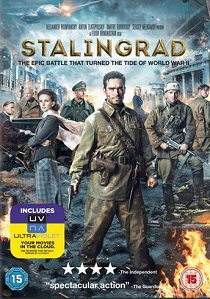 An epic look at the battle that turned the tide of World War II, Stalingrad marches on to two-disc Blu-ray with 3D and single-disc DVD with UltraViolet 23rd June 2014 from Sony Pictures Home Entertainment. The film is also released on Digital June 16th. As the highest-grossing Russian film of all time, Stalingrad contrasts the grand scale of the famous battle with the intimate human drama among the Russian soldiers, the few remaining civilians and the German soldiers who invaded the city.

The film is directed by acclaimed Russian filmmaker Fedor Bondarchuk (9th Company), who was introduced to the world of cinema at an early age as the son of actress Irina Skobtseva and internationally acclaimed film actor and an Academy Award®-winning director Sergei Bondarchuk. The film stars an ensemble cast including Thomas Kretschmann (King Kong), Petr Fedorov, Sergey Bondarchuk, Mariya Smolnikova and Yanina Studilina.

The Stalingrad Blu-ray comes with two all-new featurettes. The Making of Stalingrad is a behind-the-scenes look at the making of the film, and Stereoscopic Stalingrad features experts Steve Schklair and Matthew Blute, describing how Russia's very first IMAX 3D film was created.

Stalingrad is an epic look at the battle that turned the tide of World War II. A band of determined Russian soldiers fight to hold a strategic building in their devastated city against a ruthless German army, and in the process become deeply connected to two Russian women who have been living there.

Stalingrad is directed by Fedor Bondarchuk from a screenplay by Ilya Tilkin and Sergey Snezhkin, based on chapters from the novel Life and Fate by Vasiliy Grossman. The film was produced by Alexander Rodnyansky, Anton Zlatopolskiy, Dmitry Rudovskiy and Sergey Melkumov, with Nataliya Gorina serving as executive producer.