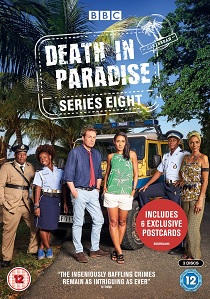 The smash-hit whodunnit returns. Detective Inspector Jack Mooney (Ardal O'Hanlon) has now settled in to life on the beautiful Caribbean island of Saint Marie and is starting to really get to know the people and places - to a degree that surprises some of his colleagues.

But there's little time for sightseeing, as there are some fiendishly clever murders to solve. From a popular local radio DJ shot dead live on air to a killing during a horseback trek into the rainforest, Jack and his team have their work cut out.

To add to the chaos there's a new face on the team, as uniform officer Ruby Jones arrives with energy to spare and her own unique take on crime fighting. And the team are delighted to discover that Florence has got a boyfriend - until a shocking turn of events makes them all question their judgement.

Jack must lead them through personal ups and downs while using his unconventional methods to solve some of their most challenging cases yet.