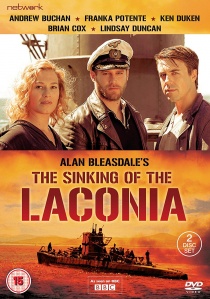 Over ten years after his popular but controversial television adaptation of Oliver Twist, the acclaimed BAFTA Award winning writer Alan Bleasdale (G.B.H.; The Monocled Mutineer; Boys From The Blackstuff) makes a welcome and long overdue return with The Sinking Of The Laconia, released on DVD by Fremantle Home Entertainment on 14th March 2011, and a powerful two-part wartime drama telling an epic story of the unexpected gallantry and amazing heroism shown by ordinary people in the face of extraordinary adversity.

Brian Cox stars as Captain Sharp, captain of the RMS Laconia, a luxury cruise ship turned troop ship carrying civilians, children, wounded soldiers and Italian prisoners of war, which, on 12th September 1942, was unexpectedly attacked by a German U-boat and hit by two torpedoes while sailing 130 miles off Ascension Island in the South Atlantic Ocean.

As the ship began to sink, meaning almost certain death for the passengers, the commander of the U-156, Werner Hartenstein (Duken), decided to contradict the orders of the Nazi High Command and instructed his crewmen to save as many of the shipwrecked survivors as possible. During the next few days, the crew of the U-156 saved a total of 400 people, with 200 crammed on to the deck of the surfaced submarine and another 200 in lifeboats towed behind it. As Hartenstein arranged for messages to be sent to German U-boat Command and the Allies to organise a full rescue of the survivors, in a terrifying twist of fate, a U.S. B-24 bomber was already moving in to attack...

A truly moving story of integrity, honour, friendship and the triumph of the human spirit in the most incredible situations, The Sinking Of The Laconia is a monumental TV mini-series from one of Britain's finest screenwriters.

DVD
Tender and violent, terrifying and comic, The English, released on DVD 19th December 2022 from Dazzler Media., takes the arrows and bullets of its genre only to twist them into a uniquely compelling parable on gender, race, ... END_OF_DOCUMENT_TOKEN_TO_BE_REPLACED
Top PicksView