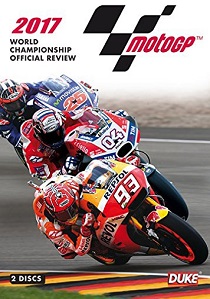 The most high powered and high profile motorcycle Championship in the world never fails to deliver on the promise of a thrilling season. With Marc Márquez and Andrea Dovizioso in the hunt for the title with just two rounds to go how could it be anything other than exciting?

Five winners in a season might not be approaching 2016's thriller for sheer diversity but it certainly isn't giving anything away in the drama stakes. The Ducatisti have had a particularly nervy season with Dovizioso becoming the first Ducati rider to lead a championship since Casey Stoner in 2009. Could we see the fairytale ending they so crave (and deserve)?

However the result turns out you can be sure the Review will be an absolute stormer, packed with three hours of the very finest highlights, showing all the important moments as the leaders battle for every vital advantage in the title chase.

Of course, there will also be interviews with the stars and our expert commentators will be there to guide you through all the twists and turns.

DVD
In The Undoing, released on DVD and Blu-ray 22nd March 2021 from Warner Home Video, a chasm opens up in the seemingly perfect life of a successful therapist: a violent death, a missing spouse, and a ... END_OF_DOCUMENT_TOKEN_TO_BE_REPLACED
Hot PicksView