Packing an extra punch, Kick-Ass 2, the second installment in the irreverent action-comedy franchise, comes to DVD and Blu-ray on 9th December 2013 courtesy of Universal Pictures UK. In addition to more than an hour of behind-the-scenes featurettes, filmmaker commentary, and extended scenes, the Blu-ray also comes with an exclusive alternate opening.

Self-made superhero Kick-Ass (Aaron Taylor-Johnson) and sweet-faced, foul-mouthed assassin, Hit Girl (Chloe Grace Moretz) try to return to life as "normal" teenagers, but are soon faced with their deadliest challenge yet. To seek revenge for his father's death, Red Mist (Christopher Mintz-Plasse) has re-invented himself as the leader of an evil league of super-villains. To defeat their new nemesis, Kick-Ass and Hit Girl must team up with a new wave of masked crusaders, led by the badass Colonel Stars and Stripes (Jim Carrey), in this battle of real-life villains and heroes. 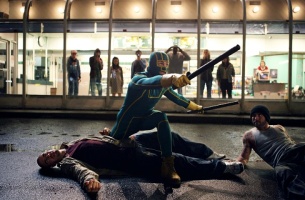 HotUHD
Dave Lizewski is an unnoticed high school student and comic book fan who one day decides to become a superhero, even though he has no powers, training or meaningful reason to do so in Kick-Ass, released on 4K UHD 26th December 2022 from Universal Pictures (UK). END_OF_DOCUMENT_TOKEN_TO_BE_REPLACED
Comments
Hot Pick