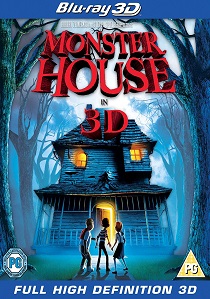 Amid the growing excitement for 3D in the home, Sony Pictures Home Entertainment (SPHE) have announced the release of Monster House, debuting 11th October 2010 on high definition Blu-ray 3D.

The Blu-ray 3D release of Monster House will make viewers living rooms come alive as they experience a whole new dimension of the animated feature in full 1080p high definition 3D, optimized for the latest 3D playback devices and eyewear. The 2D version of the film is also included on the disc for playback on all existing Blu-ray players.

Monster House tells the animated story of three friends who discover that their neighbour's house is really a living, breathing scary monster. In addition to bringing the film's theatrical 3D experience into the home, the Blu-ray 3D release also offers a thrilling fright-fest of special features including eight featurettes, a filmmaker's commentary and the "Art of Monster House" photo gallery.

Even for a 12-year old, D.J. Walters has a particularly overactive imagination. He is convinced that his haggard and crabby neighbour Horace Nebbercracker, who terrorizes all the neighbourhood kids, is responsible for Mrs. Nebbercracker's mysterious disappearance.

Any toy that touches Nebbercracker's property promptly disappears, swallowed up by the cavernous house in which Horace lives. D.J. has seen it with his own eyes! But no one believes him, not even his best friend, Chowder. What everyone does not know is D.J. is not imagining things. Everything he's seen is absolutely true and it's about to get much worse than anything D.J could have imagined.

DVD
Villanelle and Eve are back again with more explosive action and breathtaking cliffhangers in the latest instalment of the multi-award winning drama Killing Eve, released on DVD 2nd November 2020 from ... END_OF_DOCUMENT_TOKEN_TO_BE_REPLACED
Hot PicksView