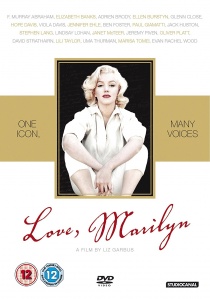 One icon, many voices. Drawing on never-before-seen personal papers, diaries and letters Love, Marilyn is released on DVD from 28th October 2013, courtesy of StudioCanal.

Marilyn Monroe invented her public persona at the expense of concealing a private side known only to her close confidants. Fifty years after her death, her creation still blazes brightly in our cultural imagination, while the creator continues to lurk in the shadows. Drawing on never-before-seen personal papers, diaries and letters, Academy-award nominated director Liz Garbus (Bobby Fischer Against The World, The Farm: Angola, USA) worked with acclaimed actresses to evoke the multiple aspects of the real Marilyn - passion, ambition, soul-searching, power and fear - in an absorbing and astonishing portrait. These documents, brought to life in this film by some of our contemporary icons and stars, give us a new and revelatory understanding of Monroe, revealing her carefully guarded inner life.

Marilyn Monroe was a woman who did not believe true love was possible and yet sought it all her life. This is an actress who at the height of her fame abandoned Hollywood to study acting with Lee Strasberg - in a room of resentful unknowns, because she wanted to be taken seriously. In Marilyn Monroe, the magic of a once-in-a-generation talent, and the reality of so many women caught between strength and insecurity, love and career, are amazingly united.

UHD
Following the global success of Godzilla and Kong: Skull Island comes the next chapter in the cinematic Monsterverse in Godzilla II: King of the Monsters, arriving on DVD, Blu-ray and 4K UHD 7th ... END_OF_DOCUMENT_TOKEN_TO_BE_REPLACED
Hot PicksView